Talayotic Menorca: a trip to the past 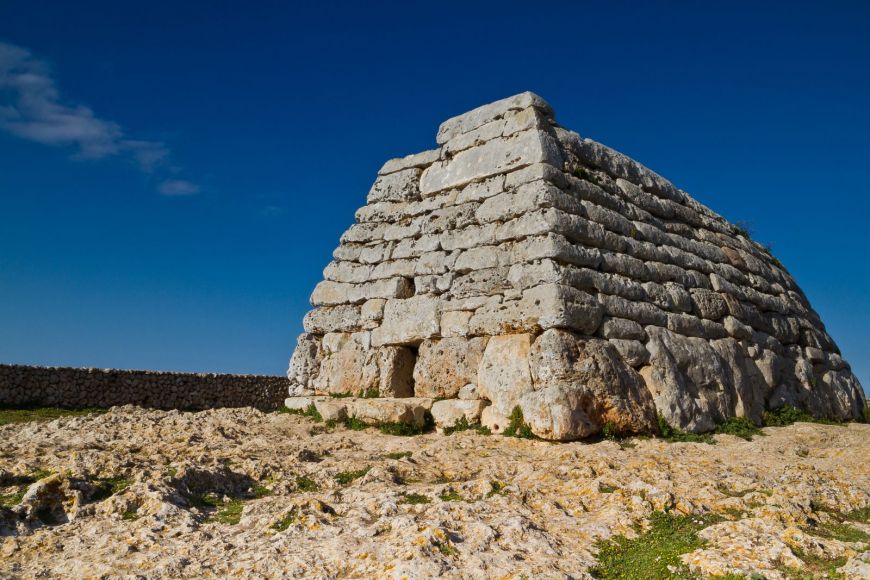 The wonders that Menorca offers on the coast are well known. But have you taken a look inside the island?

The prehistory of Menorca dates back a few thousand years. The rock, present in many of the human manifestations of all times, is the protagonist of this post, in the form of archaeological sites. You should inform yourself before the excursions to understand the context and the importance of these enclaves. But we assure you that a walk through Menorca 3,000 years ago can be a fascinating journey through time.

At the moment Menorca is waiting to know if it is included in the list of elements considered World Heritage Site by UNESCO thanks to the Talayotic heritage, a legacy formed by the Cyclopean constructions and all the knowledge that has detached itself from them. It is not the first time that this milestone has been attempted and local institutions have made an effort to ensure, this time, the declaration for the year 2022.

Within the catalog of this declaration of world heritage there are some archaeological sites that remain within the municipality of Ciutadella. Although we recommend visiting several that are in the eastern area of ​​the island for its spectacular nature and conservation. Let's first look at the ones closest to the Sagitario Hotels establishments.

It is one of the most recognizable elements, due to the number of images, postcards and videos that have been made of this funerary construction in the shape of an inverted ship or ship. Hence its name. What makes the Naveta des Tudons special is its exceptional state of preservation, as well as being a unique construction in the world, since the “navetas” are only found in Menorca. In the excavations that have been carried out over the years, human remains of hundreds of individuals and grave goods were found, which allowed us to expand the chapter on the mortuary rites of the time.

La Naveta des Tudons is located on the main road, a few kilometers from the Ciutadella exit. It is easily accessible and has a car park, which can be reached by car or on scheduled excursions by bus. Monday is the day of free access, while the rest of the week you will have to pay an entrance fee of € 2 per person. You can check the opening hourshere.

You will find the spectacular nature of Son Catlar in its great wall, which completely surrounds the perimeter of the town, one of the largest in the Balearic Islands. There are almost 900 meters of built wall that, in some sections, reaches 3 meters in height. If the spectacular nature of the wall takes your breath away, what it hides inside is not left behind. Three talayots, a taula enclosure and a hypostyle hall complete the complex, which is marked with explanatory signs.

To get there, you must take the Sant Joan de Missa path, towards the southern beaches of Ciutadella, and turn off towards Son Saura. The entrance to the town of Son Catlar is very well signposted, and it also has a large car park.

Prehistoric settlers already knew how to choose well the locations with the best views for their villages. Or so we might think looking at the enclave chosen for this set of houses, located on a peninsula in the Cala Morell area. Although it may seem like a perfect location, archaeologists who have been studying this site since 2011 have come to the hypothesis that the people who inhabited this town, made up of 13 houses, decided to settle there as a defense. The vast majority of the Talayotic settlements are located in the interior of Menorca, in the countryside, sheltered from storms and strong winds. But it is not the case of the coastal town of Cala Morell, which is also special for not using the cyclopean construction technique, but the houses were built with small stones.

Access to the town is a bit difficult, considering that there is hardly any space to leave the car parked and that you have to walk the distance between the road and the town, crossing several stairs and rocky sections. But the excursion is worth it.

Also in Cala Morell you can visit one of the most important necropolises in Menorca. The peculiarity of this archaeological site is that it consists of artificial caves, dug into the rock and used as burial sites. In total there are 14 cavities at different levels that form a route through uneven and wild terrain, from which the geological diversity of the Cala Morell area can also be observed.

As with the coastal town, a series of posters point out and explain the peculiarities of these caves, which can be visited all year round for free.

Other deposits to consider

In addition to these four sites in Ciutadella, which are those that are part of the candidacy for World Heritage, we advise you to visit places such as Torralba d'en Salort, where you can see the highest taula on the island in one of the better preserved enclosures. Or Torre d'en Galmés, a spectacular town where you can also discover the prehistory of the island in an interpretation center.